View source
This page is about Tinker Bell, a recurrent Disney's character. For deeper information about other franchises see Disney Wikia.

“A Fairy's work is much more than at first it might appear. Suppose your broken clock ticks, though it hasn't in a year. Prechance you'd find a toy you lost or jingling bells you hear. It all means that one very special fairy might be near.”
―Narrator[src]

Tinker Bell, also nicknamed Tink or Miss Bell, is a Tinker-talent fairy and the main protagonist of Tinker Bell movie series from 1 to 5.

Her first appearance outside the Disney Fairies franchise was in Peter & Wendy (1904).

Tinker Bell is present in all medias from both Disney Fairies and Tinker Bell franchises.

See each link for the full list of the respective medias:

Tinker Bell is a Tinker-talent fairy interested in lost things that come from the Mainland. In the movies, Tink crafted new tools that help with other fairies’ talents and a variety of many other tasks. [1] In some books and the comic series she is specified as a pots-and-pans-talent, being her work and specialty to fix them and other metal items.

Tink's first home from 2008 film development, and used in games.

In Tinker Bell (film), Tinker Bell began her life when a baby laughed for the first time on a winter's night. The laugh was carried on a dandelion seed (In Secret of the Wings, it was revealed that the laugh actually broke into two seeds and one traveled to the winter woods and became Periwinkle) to Never Land, where it was guided by the fast-flying fairies to a special area at the Pixie Dust Tree. Terence poured a cup full of Pixie Dust on the seed, and it turned into the fairy Tinker Bell. When searching over the items presented by the fairies to find her talent, the tinkers' hammer was the only one she passed over. However, the hammer floated toward her and glowed brightly when she touched it, indicating great skill, and Queen Clarion was told by Never Land to name her "Tinker Bell." She accepted her role as a tinker until learning that tinker fairies do not visit the Mainland. Unwilling to give up on seeing the mainland, she tried to learn how to be a different type of fairy from her friends, which proved impossible. Vidia suggested that Tink could become a garden fairy if she could round up the Sprinting Thistles into a pen, but Tink's efforts resulted in wrecking the fairies' efforts at bringing spring to the mainland. Tink was able to set the preparations for spring back on track with inventions she built from lost things, and as a sort of reward Queen Clarion allowed Tinker Bell to visit the Mainland to return a music box to a young Wendy.

In Tinker Bell and the Lost Treasure (film), Tink was chosen to create the ceremonial scepter for the Autumn Revelry, which would create blue pixie dust. When Terence accidentally broke the scepter, Tink broke the moonstone in a fit of rage (which was to go into the scepter). Tinker Bell set off to find the Mirror of Incanta, which would allow her to wish for a new moonstone. She reached the pirate ship which was rumored to have the mirror. She is joined on her adventure by a fire fly named Blaze. But things went wrong here too, when she accidentally used the Mirror’s last wish, her temper causing trouble once again. Terence arrived on the ship after following Tinker Bell’s trail, and helped her to use the broken fragments of the moonstone, which allowed her to create a more effective scepter. She and Terence then led the Revelry to the Pixie Dust Tree.

In Tinker Bell and the Great Fairy Rescue, Tink went to Fairy Camp on the mainland, presumably an outpost where nature fairies stayed to monitor nature. While there she met Lizzy Griffiths, a lonely nine-year-old human girl. When Lizzy's father discovered Tinker Bell, he tried to capture and show her to other scientists, but ended up capturing Vidia instead. Tinker Bell, Lizzy, and her friends talked Martin Griffiths into releasing Vidia.

In Pixie Hollow Games (special), her partner was Fairy Mary. They did well and made it to the second day, but had lost at the game of twig spheres. She fixed Rosetta and Chloe's cart, and cheered them on.

In Secret of the Wings (film), Tinker Bell travels to the Winter Woods. During her trip, Tinkerbell meets a Frost-talent fairy named Periwinkle who was born out of the same baby’s laugh. Because of this, they are considered twin sisters due to the fact that not only do they look alike and think alike , their wings have the exact same pattern on it, a rare feature, since usually every fairy’s wings are unique.

In Pixie Hollow Bake Off (special) Tink challenges a baking fairy named Gelata in a contest to see who can make the best cake for Queen Clarion's arrival day party.

In The Pirate Fairy (film), she and her friends - Silvermist, Rosetta, Iridessa, Fawn, and Vidia - set off on a mission to 'save' ex dust-keeper fairy Zarina from pirates after she steals the precious blue dust from Pixie Hollow. To their shock, however, they find out that she is the actually the captain of the ship. Due to her knowledge of and experiments with Pixie Dust, Zarina switches Tink and her friend's talents, leaving Tink as a water fairy. Through a series of challenges and obstacles, including the pirates themselves, Tink helps Zarina realize that she belongs in Pixie Hollow as a dust-keeper. In the end, Tinker Bell is switched back to her original talent of what she does best - being a Tinker - thanks to the returned Zarina.

In Tinker Bell and the Legend of the Neverbeast (film), Tinkerbell helps her friend Fawn smuggle a baby hawk out of Pixie Hollow, which falls through when Rosetta reveals the baby hawk, causing panic and chaos. Tink then stands up for Fawn when she is getting reprimanded by Queen Clarion saying that "Fawn's just got a big heart, that's all." She is later seen when Fawn introduces the frightening Gruff to Tink and the others. When Gruff disappears, Tink helps Fawn by searching the Winter Woods. She finds Gruff but is knocked unconscious after Gruff shoves her aside with his powerful tail. When she wakes, she tells Fawn that Gruff saved her. When she was in the Winter Woods, lighting struck a tree, causing it to fall. If Gruff hadn't knocked her back with his tail, Tink would have been crushed by the tree. Fawn is shocked and guilty because she let Gruff be captured, believing him to be dangerous due to what she saw happen to Tink. Tink helps her free Gruff and they save Pixie Hollow.

In The Trouble with Tink, Tink had lost her hammer in a game of fairy tag. She borrowed a hammer from a carpenting-talent fairy and it was too big and made everything worse that she had fixed. After so many mistakes the other fairies began to think that she had lost her talent including Terence and Queen Clarion. Even the other tinker-talents decided that Angus and Zuzu would fix Queen Clarion's Bathtub instead of Tink. Worried about seeing Peter Pan she tells Terence what happened and he offers to go with her. When they got there, Peter pretended that he had mistaken them for butterflies, saying he was going to catch them and put them in his butterfly collection. Peter thought the prank was extremely funny, and neither Tink nor Terence shared the sentiment. However, giving back Tinker Bell's spare hammer made her think much more fondly of him again, and she promised - and meant - to visit him again soon.

In Vidia and the Fairy Crown, at the beginning, when she is seen talking to Rani about the Queen's arrival day party. Vidia makes a comment that she wished to steal the Queen's crown, Tink later accuses Vidia of taking it when it goes missing. She appears again at the end during Vidia's hearing accusing her again.

In Rani in the Mermaid Lagoon, Tink comforts Rani when she is not allowed to do the top fountain for the Fairy Dance, because of Brother Dove's wings. At the dance Rani causes a disaster, when she falls off Brother Dove's back, it took Tink, Fira, and Terence to save her. Rani runs away and Tink tried to find her, but couldn't. When Rani comes back, Tink is excited to see her again.

In Fira and the Full Moon, she appeared during the arrival of Sparkle, Helios, and Glory. While Tink was showing Fira her kettle that she fixed, the triplets burnt a metal sheet of Tink's. But Tink was too caught up in fixing it to be mad.

In Prilla and the Butterfly Lie, Tink was seen briefly during dinner, when Queen Clarion announced the outbreak of fairy pox.

In Silvermist and the Ladybug Curse, she appears briefly at the fairy picnic, playing games with the other fairies.

In Iridessa, Lost at Sea, Tink helped Iridessa with ideas about how to get rid of the fairies owl problem. They have a fight about what they should do, Tink went to find a bottle and Iridessa went after her. They accidentally got trapped in the bottle and thrown off the ship. They encounter several creatures along the way including a sea turtle, the mermaids Numi and Oola then a colorful crab. They made a boat out of the bottle than washed along the shore when Beck found them and helped them back to Pixie Hollow. The light-talents then helped put sunbeams in the bottle to scare away the owl, they had put the bottle in this nest forcing him to leave.

In Four Clues for Rani, she had teamed up with Prilla for the Fairy Treasure Hunt. She felt bad for not being Rani's partner, but had thought that she already had one.

In Tink Goes Batty, Tinker Bell turns into a bat by the mermaid’s song... (this description needs completing).

In Pixie Hollow (online game) Tinker Bell appeared in two plays Cheese's Great Adventure and Fairy Mary's Day Off, and she also stayed in the Tinkers' Nook and had the following quests for the players: 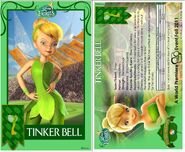 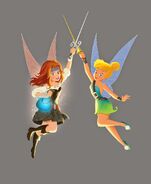 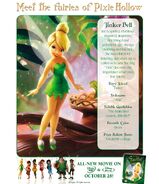 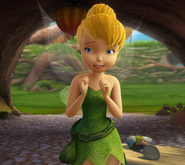