“You've heard of a dewdrop? This is a don't drop. That’s water fairy humor.”
―Silvermist[src]

Silvermist, also known as Sil by her friends, is a Water fairy with an East Asian appearance with pale skin, brown eyes, and black hair.

She acts quite differently between the books and the films. In the books, she is calm, practical and thoughtful, said to almost never cry. In the film series, she is spacey and strange to the point of utter cluelessness.

In the films, Silvermist is delightfully offbeat and has an upbeat way of looking at everything. Unfortunately, jokes and expressions don't get very far past her doorstep, and she takes hyperbole very literally. Very much a free spirit, she often listens to her heart more than her head. She’s an easygoing soul who is eager to please and makes friends easily. Her sense of loyalty is unmatched, and rubs off on Tinker Bell. Silvermist’s guilty pleasure is listening to rumors and gossip from the babbling brook and singing fountain.

In Tinker Bell (2008), Silvermist (as the main deuteragonist), is first seen at the arrival of Tinker Bell. Silvermist, along with the others, tried to help Tink change her talent when she didn't want to be a tinker any more. She tried to help by teaching her how to put waterdrops on spiderwebs, ending in a disaster. She went to the Mainland with Tinker Bell and the others to deliver spring when everything was fixed.

Later in Tinker Bell and the Lost Treasure (2009), Silvermist is seen delivering autumn with the other fairies. After, Tinker Bell and Terence have a fight, she tried to comfort him, even suggesting that Tink should apologize. Throughout the film she is seen preparing for the Autumn Revelry, like teaching tadpoles how to blow bubbles. Her spacey attitude, somewhat shown in the first film, becomes more pronounced here, as she responds to Terence's description of Tinker Bell's anger ("she just exploded!") as though she had literally exploded.

She went to Fairy Camp with the other fairies in Tinker Bell and the Great Fairy Rescue (2010). When Tink was captured by Lizzy Griffiths, she and the others built a boat to get to her. Later, she helped distract Mr. Twitches while Vidia saved Tink. When Vidia got captured by Dr. Griffiths, she went to go save her and helped Lizzy fly.

In Pixie Hollow Games (2011), her partner was Marina. They did well in a few events but lost at some point because they weren't at the last event.

In Secret of the Wings (2012), she is seen with Rosetta, Iridessa and Vidia visiting Tinker Bell in the infirmary after she had crossed the border. She meets Periwinkle along with Fawn, Iridessa, Rosetta, and Vidia. In the end she is seen with a coat in Winter Woods.

Silvermist first appears in The Pirate Fairy (2014) with Rosetta and Iridessa where she says that Zarina is always running out of pixie dust which Rosetta replies as "ironic", given that Zarina is a dust-talent. Sil later appears when the Pixie Dust Depot is destroyed by Zarina's garden-talent pixie dust. She joins the other fairies in sorrow when Zarina leaves.

One year later, Sil is seen backstage with the girls. She watches the winter fairies' performance and is startled when she sees Zarina again after she has stolen the blue pixie dust. Later, she chases after Zarina only to find her as the captain of a pirate ship. She suggests that perhaps the crew are "nice pirates". When Zarina attacks the girls and switches their talents, Silvermist instead assumes that "Zarina switched our heads!" before discovering that she's now a fast-flying fairy. Using her new talent, she is able to fly the fairies in the shell boat to the pirate ship. She nearly gets the group caught by mimicking Zarina's pirate jig during a song and dance number.

Silvermist is also there to help rescue Zarina and save the blue dust. At the end of the movie, she becomes a water talent again thanks to Zarina, who returns to Pixie Hollow.

She appeared briefly in Beck and the Great Berry Battle. During the Berry Battle, Silvermist has gone through four umbrellas and gets a new one from Rosetta.

In Tink, North of Never Land, Silvermist helps make Terence feel better after his fight with Tinker Bell by teaching him to walk on the water with skimmers - Tink sees them and becomes a bit jealous of the attention he is getting from her female friends.

Silvermist and the Ladybug Curse (2008 book)

While at a fairy picnic, while playing spots and dots, a white ladybug landed on her head. Iris acts concerned about it, because it is considered unlucky. Silvermist doesn't believe it though, but when playing fairy tag she bumps her head causing the others to think she is cursed. Vidia tries to get a rise out of her several times- an act which causes Silvermist great concern, as her attempts to prove that she is not unlucky lead to her knocking things over, and gaining a reputation as a jinx.

Numerous events conspire together to make her think she's unlucky- she misses the best songbird concert ever. In the end, despite being "the water talent who almost never cried", Silvermist was sobbing. Finally, however, she sought a cure for the curse. For a waterball contest, together with her friend Fira they try to work together to get rid of the curse. At the contest, she finds a five-leaf clover and the other fairies believe that the curse has been lifted- Silvermist, however, decides she doesn't think she was ever cursed in the first place, and instead chooses to ignore the contest (and, in a last act, scores a bullseye with a blind shot).

In Four Clues for Rani, Silvermist had accidentally dropped Tally's belt in Havendish Stream. Rani went in after it for them and got it, then she and Tally went to the Home Tree. Her partner for the Fairy Treasure Hunt was Zuzu.

Silvermist is assigned to watch over the activities of Pixie Hollow's first-ever fire-talent fairy, Necia. However, Silvermist fears and mistrusts Necia's gift, and Necia thinks Silvermist doesn't like her and Slivermist thinks that Necia doesn’t like her either. Eventually, the two come to terms when Necia's talent proves instrumental in defeating a new dragon threat. 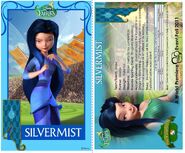 Disney Fairies: Silvermist I proud my heart into it.

Silvermist pretending to be a pirate. 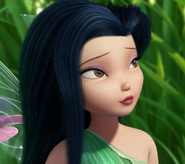 Silvermist with a lilypad on her head. 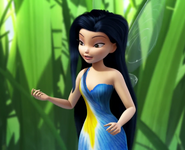