Rosetta is a charming and well-mannered garden fairy residing in Pixie Hollow. She shares a sassy streak with Tinker Bell, and in the films speaks with a Southern accent. She always tries to look her best, and loves giving beauty tips and makeovers to her friends. She loves flowers but hates dirt and mud. She is close friends with Fawn and Silvermist.

Rosetta arrived in Pixie Hollow before most of her friends, so she is presumed to be a little wiser than the others. She tends to become guilty of judging a book by its cover. Rosetta wears pink or red dresses that resemble flower petals. She has somewhat curly shoulder-length hair. In The Pirate Fairy, Rosetta temporarily becomes an animal fairy, much to her dismay; but at the end she and the others got their original talents all restored.

Like the other fairies and sparrow men, Rosetta was present at Tinker Bell's arrival. Rosetta, Iridessa, Fawn, and Silvermist first befriend Tinker Bell after the fairy accidentally crashes her mouse-bound cart due to a Sprinting Thistle attack. After comforting the tinker, Clank and Bobble arrive with new supplies for the fairies' forthcoming trip to the Mainland. Rosetta and the others showcase their magnificent abilities by testing out the new supplies, leaving Tinker Bell in awe. This gives the tinker the urge to go to the Mainland, but tinker fairies are not allowed to go as there.

In an attempt to travel to the Mainland, Tink decides to switch her talent, something that hasn't been done before. She goes to Rosetta and the others for help, but the friends feel Tinker Bell should accept her destiny. However, like her friends, Rosetta eventually decides to help, and an array of different test occurs. Despite the effort, all the attempts fail. After a while, Rosetta and her friends witness Tink repair a music box, proving her talent is correct. Even so, Tink still wants to change her talent and goes to the villainous Vidia as a last result. Vidia tricks the tinker into trying to round up the Sprinting Thistles, which ends up destroying Pixie Hollow's preparations for spring.

Tinker Bell creates new ways to repair things after having a talk with Terence. He makes her realize that being a tinker is what she's destined to become. Rosetta stands by Tink's side and uses her inventions, and spring is eventually saved. In the end, Rosetta and the others travel to the Mainland as planned, having Tinker Bell, Clank, and Bobble tag along to return the repaired music box to its rightful owner.

Rosetta plays a smaller role in the sequel. She is first seen with other garden fairies continuing with her normal duties. Later on, Rosetta is taking a flight with Iridessa and Silvermist when Tinker Bell appears and asks for their doses of pixie dust. Unfortunately for Tink, Rosetta and the others need their pixie dust to travel to the Mainland. Rosetta is lastly seen during the finale when the fairies celebrate the arrival of the blue harvest moon.

Summer has arrived, and many of Pixie Hollow's fairies and sparrow men have traveled to the Mainland to attend fairy camp. Rosetta also attends, flying there with Tink, Silvermist, Iridessa, and Fawn. After a while, Vidia reveals the presence of humans to Tink in an attempt to keep her away. Tink becomes infatuated, but Iridessa and Rosetta try to explain that humans are dangerous. Later on, Rosetta and the others learn that Tinker Bell has been captured by a human girl named Lizzy Griffiths. Vidia then leads an expedition to rescue her.

Along the way, the fairies are forced to cross a muddy river. While the river isn't too deep, Rosetta is hesitant to cross, revealing her fear of mud. Eventually, the adventure leads them to Lizzy's house, but Vidia is captured by Lizzy's father and taken to London for research. Rosetta and the others go after them, bestowing pixie dust on Lizzy so they can fly to her father, as they can't fly in the rain. When they finally approach Lizzy's father, the young girl convinces her father to rethink his actions. Vidia is freed, and the fairies have a picnic with Lizzy and her father to celebrate.

In this film, Rosetta develops a fussier, mud-hating personality that defines the character in future animated work.

Rosetta's vanity is emphasized once again, as her refusal to get dirty or be athletic has her avoiding "Pixie Hollow Games" duty every single year, until the garden-talents combine forces in order to force her to play. Now teaming up alongside eager newly-arrived fairy Chloe, Rosetta is upset about the situation, and fails horribly. However, they luckily make it to the next round, and when she sees how much victory means to Chloe (after seeing how hurt she is when Rosetta arrives to the contest wearing a full-length gown), she actually makes a real attempt at winning.

In this story, Rosetta puts in the hard work, gives up constantly looking fashionable, and actually gets dirty. Showing more sides to her, she is guilt-ridden for putting the garden-talents in last place after avoiding the slug-slime slide. Ultimately, her clever thinking and inventiveness give the garden-talents their first-ever trophy in the Games.

On an ordinary day, Rosetta is blooming flowers while Tinker Bell and Fawn are helping animals cross the border to the Winter Woods. Later on, after Tinker Bell crossed the border and froze her wings, Rosetta, Iridessa, and Silvermist rush to the doctor to pick up Tink. Tink then decides to tell her friends that her wings began to glow after she crossed. However, Rosetta finds the claims to be eccentric and fears that Tink needs to be examined by the healing fairies again. Even so, Tinker Bell crosses once more and meets her sister Periwinkle. To have Periwinkle visit the warm regions of Pixie Hollow, Tink plans on creating a snow-making machine. Clank gathers Rosetta and the others to begin work on said machine.

The next day, Tink's friends begin "Operation: Periwinkle" where they showcase their unique talents for the frost fairy. Rosetta blossoms an entire flower field for the first fairy and gives her a periwinkle flower as a gift. Periwinkle then preserved the flower in a frost blanket to die when she travels back to the Winter Woods. Periwinkle suddenly becomes weak, and her wings begin to decay. Rosetta and the others rush her across the border, and the ruler of the Winter Woods, Lord Milori, forbids Tink and Peri from seeing one another again. Overnight, the snowmaker machine began to freeze parts of Pixie Hollow, thus throwing off the seasons.

When the ice melts, the pixie dust returns, and all is well. The warm fairies are then allowed to cross the border to the Woods. There, at a celebration party.

Rosetta appears in the fifth film, where she and her friends magically swap talents. Rosetta becomes an animal fairy, much to her dismay and becomes the mother of a baby crocodile. By the end of the film, she adores her "Crocky" and enjoys their relationship (after first abandoning it), but is still happy to have her original talent back.

Rosetta in the movies is at first depicted as somewhat mature, with a Southern accent - she scolds Tinker Bell for messing about with dangerous plant creatures and gives some solid advice. However, by the third film, she is now converted into a very fussy fairy who doesn't "really DO mud," hating getting dirty. Several jokes now feature her trying to avoid dirt, admonishing others, or acting upset. This turns her into a more comedic character, as now she gets easily embarrassed, fails at athletics, can't get along with animals, and often gets teased by the other fairies, especially Vidia.

In the books, Rosetta's vanity is again emphasized. Tink, North of Never Land points out that Rosetta was "one of the prettiest fairies in Pixie Hollow. And she knew it". She is obsessed with looking pretty and making dresses, and often has "suggestions" for sewing-talents on how to improve upon their work (several times, it is pointed out that this is rude to do, but she appears clueless). While she authentically tries to be helpful, she is careless with the feelings of others.

In Beck and the Great Berry Battle, Rosetta had been asked by Beck to help make umbrellas for other fairies. She and the other garden fairies exchanged old umbrellas for new to help aid in the relief of the Berry Battle.

She appeared at the beginning of A Masterpiece for Bess, when Tinker Bell showed everyone the portrait Bess had painted of her. Later Rosetta asked Bess to paint a portrait of her. When it was done, she asked Bess to fix her nose which you never tell an art-talent. At the end she asked Hem to make her a dress, which is the newest fad.

Rosetta appeared in Tink, North of Never Land, when she sat next to Terence during Tor's story. When music came on, she made Terence dance with her.

Silvermist and the Ladybug Curse (2008 book)

She appears briefly in Silvermist and the Ladybug Curse, at the fairy picnic, playing games with the other fairies.

In Rosetta's Daring Day, she gets Fawn to help her with a noisy squirrel. The squirrel was just trying to warn them of a forest fire Fawn and Rani helped put it out. Rosetta did nothing to help. A party is announced in honor of Fawn and the others. At first Fawn didn't want to go, but Rosetta made a deal with her that she will do whatever she wants if Fawn goes. Rosetta had a terrible time at the party and the first thing Fawn makes her do is frog-riding. Wet and miserable, they decide to go cherry picking, but Fawn got trapped in a mole hole. Rosetta faced her fears of worms and mud, and pulled Fawn out. Queen Clarion gave her a medal and praised her for facing her fears.

In this book, Rosetta annoys all of the sewing-talent fairies by "suggesting" ways in which their dresses could be improved, and to get her out of their hair, Hem suggests she make a dress of her very own. Though excited at the prospect (she squeals "Eeeeeeeeeeeeeeeeeeee!"), Rosetta ends up getting hit in the head and temporarily forgetting her fashion sense. 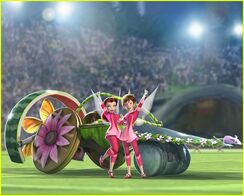 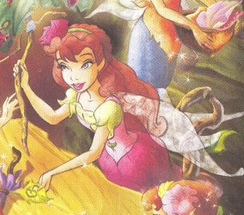 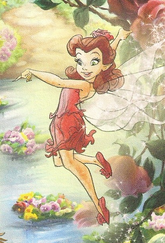 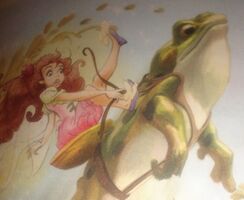 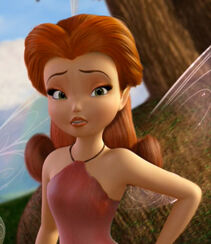 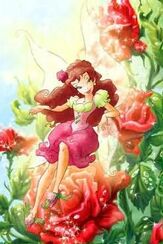 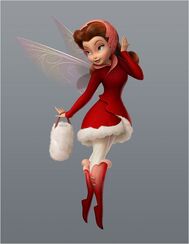 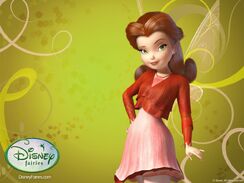 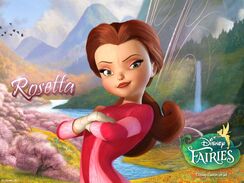 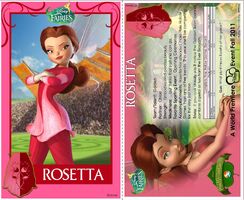 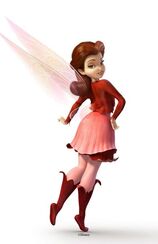 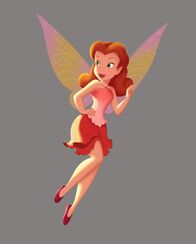 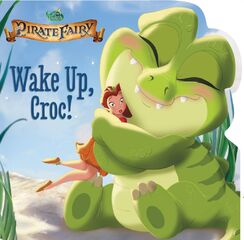 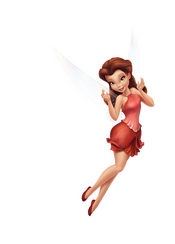 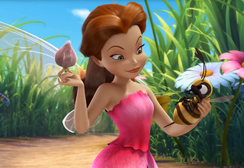 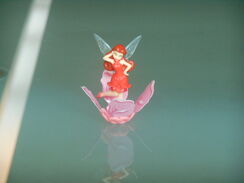 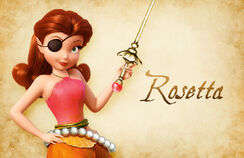 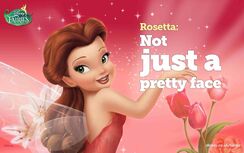