Water-talent
Rani is a Water-talent fairy who debuted in Fairy Dust and the Quest for the Egg (2005).

Rani is a water-talent fairy that can do "amazing, magical things with water:" bounce it like a ball, mold it into the shape of a fish, scoop it up in her fingers without losing a drop, or even make music/sound with water. She can also help her fellow fairies with water-related things, such as getting water to boil faster. Being a water fairy, Rani cries easily because of the extra amount of water in her, and is thus considered by her friends as very emotional and passionate. This also influenced her passion for water and her desire to work with it ; she loves rainy days, splashing in puddles, and swimming, even in her dreams.[1] [2]

After Fairy Dust and the Quest for the Egg, Rani had to cut off her wings. She became the only fairy in Pixie Hollow who can swim without drowning . Rani also knows how to whistle mermaid songs.

In Fairy Dust and the Quest for the Egg (2005), Rani is chosen as the leader of the team to save Mother Dove's broken egg, along with Prilla and Vidia. In other for the dragon Kyto to fix the egg, he demanded three items: Captain Hook's double cigar holder, a golden feather from the golden hawk, and a mermaid's comb. In order to get the comb, Rani asked Prilla to cut off her wings so she could swim to the mermaids. Rani felt no pain because fairies wings are not sensitive, and similar to hair. As soon as Prilla cut them off, Rani's wings crystallized. Upon reaching the dragon's Kyto lair, the fairies realized that they had lost the golden feather, so Rani gave up her crystallized wings instead. From the on, Brother Dove became her assistant. Whenever she needs him, Rani whistles and Brother Dove flies to her side and carries her. Even though she misses being able to fly on her own, Rani is not entirely unhappy about losing her wings, since she had always longed to swim.

In Fairy Haven and the Quest for the Wand (2007), the Never Mermaids caused the water level to rise until they were given the mermaid comb (given to Kyto previously). Rani, Tinker Bell and Queen Clarion went on a quest to get the Fairy Haven's wand. In possession of the wand, Rani's first wish was to make the mermaid Soop like her, the second to have wings that could work underwater. She grew scaly fish-like wings and gave the wand to Soop, who began singing, accidentally turning Rani into a Never Bat.

Rani retained her fairy conscience, yet she lost control of her body. She flew away and behaved like a regular never bat, much to her chagrin. When Beck, Prilla, and the Golden Hawk found her, they helped Rani regain control of her body. But now, her bat-self was trapped in her consciousness. In the end, when Rani got the wand back, her bat conscience wanted to be free, but Rani remembered her promise with Mother Dove about the dangers of wishes. All wishes were reversed. She lost her friendship with Soop and regained her fairy form. Her bat-self remained, now sharing her mind as a small subtle consciousness with a logical, polite influence, along with her usual emotional personality.

In Fairies and the Quest for Never Land (2010), Rani helped to find a way to dose Kyto with water birds. Along other water-talent fairies Rani went on the quest to keep Kyto at bay. Rani cried about the other fairies that had died because of Kyto. When her bat conscience called Gwendolyn "esteemed," Rani apologized and told Gwendolyn about Rani-bat.

Tales from The Pixie Hollow Collection

In The Trouble with Tink (2006), Rani participates in the Fairy Tag game. Later she teaches Prilla how to make fountains in the water, leading to Prilla making a successful fountain in her soup at dinner.

In Vidia and the Fairy Crown, Rani and Tink were preparing for Queen Clarion's arrival day bash when Vidia said that she would love to steal the queen's crown. Later, when the crown went missing, Rani and Tinker Bell told everyone about that exchange.

In Rani in the Mermaid Lagoon (2006), she is not allowed to work on the fountain for the Fairy Dance, because the other water fairies are afraid that Brother Dove will accidentally ruin it. When Rani arrives, she falls off of Brother Dove's back, inevitably ruining everything. Deeply upset, she runs away to Mermaid Lagoon, where she meets mermaids Oola, Mara, and Voona. She decides to once again make friends with the mermaids. However, the mermaids abandon her several times because of seemingly more interesting things, such as when they stranded her in Starfish Gap for Peter Pan. Later, she helped a sea horse who gave her a magical pearl. But when she saw his family, she missed her friends, and swam back towards Pixie Hollow. Everyone was happy to see her, and she even found a way to light up the fountain with the magical pearls.

In A Masterpiece for Bess (2006), Rani saved Bess from drowning. In return she asked Bess if she would paint portraits of her and the other water-talent fairies.

In Rani and the Three Treasures (2007), Dab, a cloud keeper water sprite, tricked Rani into watching over her rain clouds and would not take them back. Rani then became unpopular because it started to rain non stop. In the end, Dab came back and took the clouds away, much to Rani's relief.

In Dulcie's Taste of Magic (2008), Rani is seen briefly with Humidia and Silvermist. They were at Havendish Stream, cleaning it after some raccoons had gone through it.

In Silvermist and the Ladybug Curse (2008), Rani was seen at the fairy picnic playing games with the other fairies. Later, she announced a Waterball Contest where she got a bulls-eye.

In Rosetta's Daring Day (2009), Rani was watching the others playing acorn ball. Then she went with Fawn and Rosetta to put out a fire. Queen Clarion held a party in Fawn's, Rani's and Brother Dove's honor, where Rani was awarded with a medal.

In Four Clues for Rani (2011), a two week long drought had put all the fairies on edge. Rani was sick of being pitied by others, but didn't know how to stop it. She was excited when Queen Clarion announced a Fairy Treasure Hunt, so she had gone to the library to study for it, but overslept. Everyone already had a partner except Ronan. Rani had no choice but to partner up with him. She had made a bet with Vidia that if she won, Vidia would be her servant and vice versa. Rani had to ride on Cousin Dove instead of Brother Dove, since he broke his wing. Rani tries to rush through clues but Ronan tells her to slow down, which proves to be good when they get to the last clue and win the treasure hunt and the bet.

Realm of the Never Fairies"

Rani on Brother Dove, playing Fairy Tag in "The Trouble with Tink" 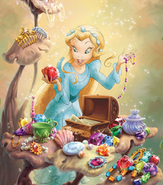 Rani and the Three Treasures 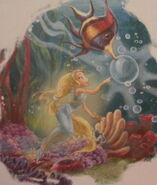 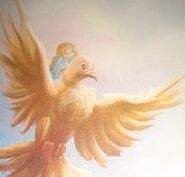 Rani in the Disney Fairies Magazine
Rani+and+the+Mermaid+Lagoon+cover+(bg).jpg
Rani in the manga 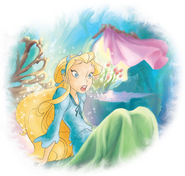 Rani from "A Fairy Frost"

Community content is available under CC-BY-SA unless otherwise noted.