Prilla is a Clapping-talent fairy, of which she is the only one with said talent. She is also one of the Never Fairies that has The Gift. Her debut was in Fairy Dust and the Quest for the Egg.

When Prilla's human (Sara Quirtle) laughed for the first time, some of her essence stuck to the laugh, making it incomplete. Because of this, Prilla seemed talentless, only later discovering her abilities:[1]

In the Home Tree's Directory, Prilla's lives in "Room 7P, NNW Branch." "Because her talent was a mystery at first, the decoration-talent fairies did not know what to do. So she received standard-issue fairy furniture [...]" The floor is covered with a grass carpet and colorful flowers, the dressing table and chairs are decorated with pears, the bed is made from daisies and the wooden mirror has flowers motifs. Beside her bed is her favorite teapot, and her foux-mouse slippers.[2][3]

From Fairy Dust and the Quest for the Egg

In Fairy Dust and the Quest for the Egg, when Prilla arrives, many of the fairies thought she was incomplete because she didn't know her talent. Tinker Bell helped show her around Pixie Hollow, while Prilla looked for a talent where ever they went. She slept through most of the hurricane, but landed on the beach later close to Mother Dove. Queen Clarion and Mother Dove selected her, Rani, and Vidia to go on the quest for the egg. She distracted Captain Hook while the others took his cigar holder, helped with the golden hawk, and had to cut off Rani's wings so they could get a mermaid comb. Her and the others then took the objects to Kyto to save the egg. When, Kyto had contaminated the egg she got clumsy children to clap to save it, discovering her talent.

In Fairy Haven and the Quest for the Wand, during the flooding of Fairy Haven, Prilla flashed back and forth to the Mainland trying to stop the flood by getting clumsy children to clap. She also wished for Sara Quirtle to be complete, it was the only wish that wasn't reversed. Later, she helped Tinker Bell and Beck find Rani-bat in a cave.

In The Trouble with Tink Prilla gives the news about Queen Clarion's bathtub to Tinker Bell. Later Rani teaches her how to make fountains with fairy dust.

In Vidia and the Fairy Crown, Prilla didn't believe that Vidia had taken the crown so she decided to help her clear her name. They first went to the Queen's chambers to question the Queen's helper fairies, then to Aidan, where they learn of the mix up. Twire is next, then Lympia after news of Twire accidentally sending the crown to the Laundry Room. Than Nora, who had mistaken it as on of the Replica crowns. Together with Dupe, they try on all the crowns until Vidia finds the real one. Vidia has them all be witnesses and clears her name. Later, she thanks Prilla in her own special way.

In Fira and the Full Moon, she is seen at the arrival of Sparkle, Helios, and Glory. She pointed out that she had seen the laugh and knew it that it was special.

In Dulcie's Taste of Magic, when Dulcie's comfort cake is revealed, Prilla is seen at the end amazed with the other fairies about how it turned out.

In Four Clues for Rani, Prilla is seen when Queen Clarion announces the Fairy Treasure Hunt, asking what it is. She teamed up with Tinker Bell for the treasure hunt, neither knowing that Rani didn't have a partner yet. Later she and Tink were tricked with the rest of the fairies by the Lost Boys and Peter Pan. Prilla goes to Tink's House.

In Prilla's Prize, as she is the only one in her talent, and by invitation, she tries to participate in manifold talents games. Despite failing in all of them, in the end she gains a prize from being the fairy that participated in most games.

From Fairy Dust and the Quest for the Egg 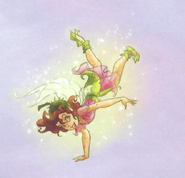 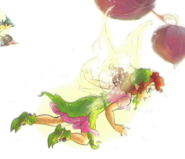 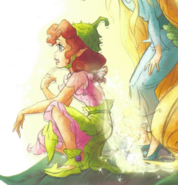 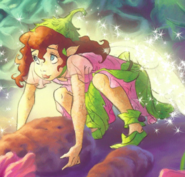 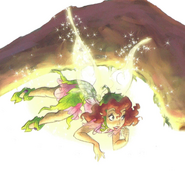 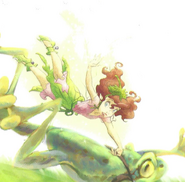 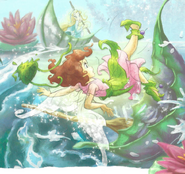 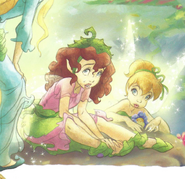 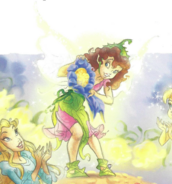 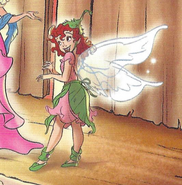 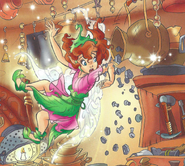 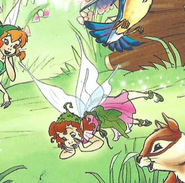 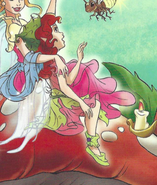