Before November 10, 2011, you could create up to three fairies or sparrow men. After this date, only members who created a fairy as a member before this change could have three fairies per account. There was a minimal amount of hairstyles that you could start with, but you could get more later as you collected ingredients. You could also choose one of these talents for your fairy or sparrow man: Tinker, Water, Garden, Light, or Animal.

The creation process drastically changed over the years, and some of the changes were frowned upon, such as the option to make a custom outfit at your arrival being taken away, as well as the hairstyle limit.

The game was centered around your pixie gaining Talent Points to achieve a higher Talent Level. A key factor in achieving this goal were Quests.

These would often be given to you by your Mentor Fairy, as well as the other Famous Fairies around the Hollow. 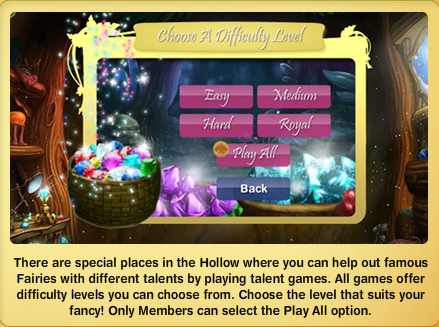 There were mini-games scattered all around Pixie Hollow's meadows, referred to as "Talent Games." Playing these games would help increase a players Talent Level. While all players could play levels Easy, Medium, Hard, and Royal, a membership was required to "Play All" (playing all the levels in chronological order).

There were also multiplayer games that could be played at parties (except Animal Derby) and ingredient rewards that changed each season.

Events were when players of Pixie Hollow could celebrate mainland-like holidays with their friends. Some events also featured special collections for purchase released in shops, free special items, and seasonal badges.

Since the locks of membership/diamonds were raised, events became less useful to people who did not pay for a membership. For example, free players could not visit the ballroom; therefore, they could not get the special gift inside. Free players also had locks on most badges, such as member-only quests.

Events and their dates:

Clickables were toys players could buy that would be able to interact with the game.

These came in the forms of Disney Fairies themed charms, bracelets, and games.

By linking your Clickable with your account, your in-game Pixie would be able to get:

Meadows were places you could explore, gather items, complete quests, and access shops or games. The meadows included:

The Never Council were a group of fairies that were made by the creators of the game. They consisted of:

Fun facts about the NC include:

As the game was prominently meant for children to enjoy, you would have had to obey four simple rules when playing. These consisted of:

On August 20th, 2013, the Never Council announced that the game would close on September 19th, 2013 (this was scheduled for two of Disney's other MMORPGs, Pirates of the Caribbean Online and Toontown). As a "thank you" for all the players, they allowed all accounts free unlimited member access until the closing.

Though it was stated that the reason for closing was to focus on mobile apps and their soon to be only online world, Club Penguin, this is not the only reason behind the close, as they also were closing the games because of all the money they wasted making Disney Infinity, which in itself officially closed on March 3rd, 2017.

The Closing FAQ by Disney can be found here. though it now redirects to a 404 error.