“I call them Found Things.”
―Periwinkle to Tinker Bell[src]

Periwinkle is a Frost-talent fairy who lives in the Winter Woods. She makes her first appearance in Secret of the Wings. She is Tinker Bell's twin sister, as they were born of the same laugh.

Periwinkle ventures out to the border between Autumn and Winter to watch the animals crossing, where her wings start to sparkle. Not knowing what could be causing the shimmer, she goes to ask Dewey, the keeper of fairy knowledge, about it at the Winter Woods library. At this time Tinker Bell, looking for answers to the same question, comes into the library. There, they learn that the sparkle is a phenomenon that occurs when two fairies born of the same laugh draw close to each other, thus meaning Periwinkle and Tinker Bell are sisters!

Shortly thereafter, Lord Milori arrived to speak to Dewey about his suspicions that a warm fairy had crossed into the Winter Woods and commanded Dewey to send any warm fairy who had crossed home. Dewey, unwilling to split up the sisters so soon, tells Periwinkle that although he was ordered to take Tink home, Lord Milori didn't say when. Periwinkle takes Tinker Bell on a tour of the woods, where Tink meets Peri's friends, bubbly Gliss and sarcastic Spike, and then to her home, where they discover that their tastes are virtually identical.

However, the campfire Tinker Bell made to keep herself warm damages the ice that Periwinkle's house is on, and the whole thing collapses. They are rescued by Dewey riding his lynx Fiona, and Dewey decides that it really is too dangerous for Tinker Bell to remain. Dewey takes Tinker Bell back to the border. Periwinkle thinks that this will be goodbye, but Tinker Bell privately lets her know that she has a plan, and tells her what she needs to do to make her plan work.

Tinker Bell later returns with a machine designed to make "snow" by grating a block of ice. This machine creates a small cold zone that Periwinkle can stay in and keep cool while touring the warm parts of Pixie Hollow. Periwinkle meets Tinker Bell's friends, and Rosetta gifts her with a periwinkle flower, which she wraps in a sphere of frost to keep it from wilting. They decide that if they bring Periwinkle to Queen Clarion, the queen will change the ruling and allow them to be together.

At first the tour goes well, but when the ice runs out and Periwinkle is exposed to warm temperatures, her wings begin to wrinkle and wilt. Periwinkle is rushed back to the border, where they are met by Lord Milori. Peri's wings recover, and Milori announces that Tinker Bell and Periwinkle are forbidden from seeing each other again. Queen Clarion, having heard that a cool fairy had crossed over, arrives and agrees with Lord Milori's declaration - and states that the rule against crossing the border was in fact her own: after a fairy had crossed the border to be with a lover, the temperature change had broken that fairy's wing. Because broken wings cannot be fixed, Queen Clarion created the rule to keep other fairies from suffering the same fate.

The next day, the warm regions of Pixie Hollow begin to freeze over when the abandoned snow maker grates ice from the Winter Woods that fell into it. Tink and her friends destroy the snow maker, but the damage is already done: Pixie Hollow, knocked off its natural balance, begins to freeze over. When Tinker Bell realizes that the flower that Periwinkle wrapped in frost is still alive, she knew that if Periwinkle and other frost fairies could cover the Pixie Dust Tree could be saved. She goes to her to see if she can help save the Pixie Dust Tree from the freeze by covering it with frost. Perwinkle and her friends agree to do so, and offer their assistance. With the help of Perwinkle, her friends, and the timely arrival of Lord Milori, the Pixie Dust Tree is saved.

After the tree is saved, Tinker Bell reveals that one of her wings cracked when she crossed into the Winter Woods earlier. Fortunately, when Tinker Bell and Periwinkle place their wings against each other, the damage on Tink's wing mends itself, because of the familiar pattern.

Lord Milori and Queen Clarion apologize for keeping Tinker Bell and Periwinkle apart, and allow them to see each other again. Soon after, warm fairies are all allowed to cross into the Winter Woods, with frost fairies covering their wings in a coat of frost to keep them safe. Peri, Tink, and their friends celebrate as the Winter Woods and the rest of Pixie Hollow are no longer separated.

Periwinkle has a brief appearance in The Pirate Fairy. She is seen during The Four Seasons Festival performing in the winter part of the festival. She is also seen again when Zarina use her garden fairy pixie dust to open the poppies that put everyone to sleep.

Tinker Bell is Periwinkle's twin sister. Periwinkle loves her very much and is thrilled to discover she is her sister. Peri and Tink are very loyal to each other, and Peri will always be there for Tink. She is devastated when they are told it is too dangerous for them to be together because of Periwinkle's wings wilting in the heat and Tinkerbell's wings freezing in the cold. The two sisters work together to save their home and will always be there for each other.

Gliss is one of Periwinkle's best friends. She's bubbly, goofy, and fun-loving. Peri and Gliss enjoy hanging out together in the Frost Forest or sliding down frost-covered waterfalls.

Spike is Periwinkle's sarcastic, bored best friend. She is the exact opposite of both Peri and Gliss because she is somewhat lazy and rather pessimistic. Spike is suspicious of Tinkerbell at first and reluctant to join the others in welcoming her to the Winter Woods. But she soon warms up to Tink and, despite her gloomy disposition, values her friends and enjoys spending time with them. She is very much like Vidia, who despises Tinkerbell at first and is always looking on the dark side of things but learns to value friendship. 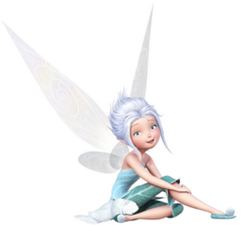 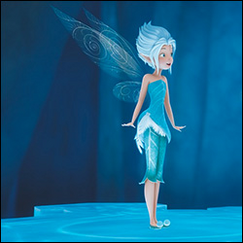 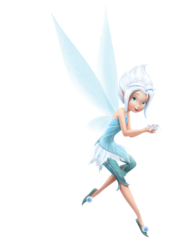 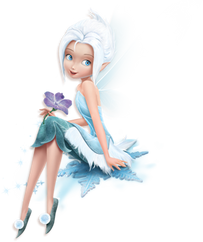 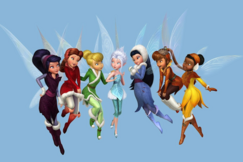 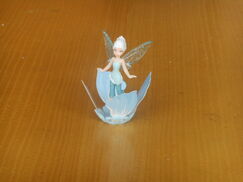 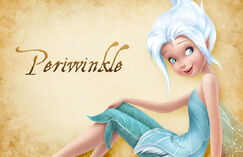 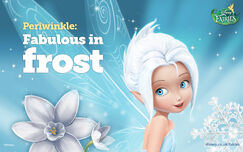 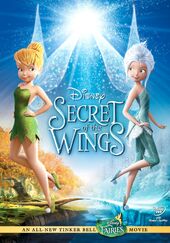