"You're Prilla, aren't you? Prilla. You've come where you belong, Prilla. I'm glad as can be that you're here." -Mother Dove welcomes Prilla to Pixie Hollow

Brother Dove (brother)
Cousin Dove (cousin)
Mother Dove is a magical creature and the closest thing to pure goodness in Never Land. She makes her nest in a hawthorn tree at the edge of Pixie Hollow. Newly-Arrived fairies are taken to meet her. Mother Dove feels like home, even more than Fairy Haven or the Home Tree itself. [1]

It was at the base of the hawthorn tree that the fairies first found her, drawn by her goodness. She was also good friends with the Sky Bird before she was magical, they still stay in touch through Queen Clarion.

Mother Dove once restored magic to Never Land and brought life back to Pixie Hollow. When she was still an ordinary bird, a terrible fire swept through Never Land, burning everything in its path. At this time, the Pixie Dust Tree was destroyed. Sitting in her hawthorn tree, Mother Dove burned along with the rest of the island. But she was not hurt. Instead, she was transformed into a magical creature vested with great knowledge.[2]

She taught the fairies a new way of making pixie dust by grinding the magical feathers she shed each year during the Molt. Mother Dove knows each of the fairies by name, and she loves every one of them, even Vidia, who once plucked her. They often come to her for guidance. But the fairies aren't the only ones who rely on Mother Dove. It is Mother Dove's egg that holds the secret to all of Never Land: day in and day out she sits on it, making sure it comes to no harm, for as long as her egg stays well and whole, no creature in Never Land will ever grow old.[2]

She first appears in Fairy Dust and the Quest for the Egg when the newly-Arrived Prilla is taken to meet her. Prilla hopes that Mother Dove can tell her what her talent is, but all she can tell Prilla is that she has one. Some time later, a hurricane destroys her egg; she sends Prilla, Vidia, and Rani on a quest to find it, and asks Tinker Bell to watch over her. The egg is ultimately saved by Kyto's fire; however, the dragon contaminated the egg with some of his own evil. Prilla used her talent - the talent to instantaneously "blink" to the Mainland - to get Clumsy children to clap their hands and purify the egg through belief.

In Fairy Haven and the Quest for the Wand, Mother Dove said that it was too dangerous to give Soop a wand. But, when Soop sent a flood to Fairy Haven she has no choice. She sent Rani, Tinker Bell, and Queen Clarion on the quest to find a wand. It broke her heart to see all the fairies captured with wand madness. She has a wish of her own but would never wish for it, the wish is for her egg to hatch. At the end, she told Prilla to put the wand back to the great-wanded fairies castle.

Later in Fairies and the Quest for Never Land, she was scared of Gwendolyn's love for the never fairies. But she let her stay, warning her that something bad might happen out of kindness. Later when Gwendolyn had a dream about two tiffens setting Kyto free, she sent Prilla to retrieve them. Towards the end Kyto captured her and her nest, she also saved Gwendolyn when her skirt caught on fire. She was thankful to Gwendolyn for her help with the quest. 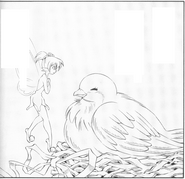