Lily is a garden fairy. She can make any plant or flower bloom and grow, spends all her time in her garden, and one of her dearest friends is a bumblebee named Bumble. Though she always works hard, she delights in sitting and watching the grass grow.

Lily is arguably the most important garden-talent in the books, featuring in several early stories as the leading expert on garden matters, and the most-commonly seen of her group. However, she does not appear in the films, which use Rosetta as the garden-talent representative. Thereafter, Rosetta gets two books of focus, and Lily one more.

She appeared briefly in Beck and the Great Berry Battle, during the Berry Battle, she and the other garden-talents helped aid in the relief by making and giving new umbrellas to other fairies.

In Lily's Pesky Plant, she and Iris took care of a plant together. The plant turns out ugly to look at, but Iris and Lily loved it anyway. Soon the plant starts to act strangely- it gives off a foul smell, and sticky pink pollen comes off of it. They eventually have to decide what they are going to do with it, all the other fairies are less than happy about the plant. Iris saved the day when she found out that the plant was a Ever tree, and the last one in Never Land.

She appeared in Fira and the Full Moon, when Fira came to visit her garden and ask her a question. Then Sparkle, Helios, and Glory made her plant wilt by having an immature contest.

At the beginning of A Masterpiece for Bess, she was seen with Rosetta. She was there when Bess unveiled her portrait that she did of Tinker Bell.

She was seen in Dulcie's Taste of Magic, when Dulcie went to visit her garden. And again later, when Dulcie asked her to help find the creeping treacle vine. She helped take Dulcie all the way to the Never Arbor. Later she was seen again when Dulcie unveiled her comfort cake.

She had paired up with Violet in Four Clues for Rani, for the Fairy Treasure Hunt. She had thought that Rani already had a partner, but said she was sorry when Rani hadn't. 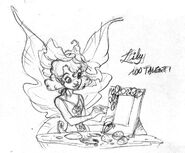