“It might be the sparkliest thing I've ever seen, and I've seen a lot of sparkly things!”
―Iridessa[src]

Iridessa is a perky and energetic light fairy in Pixie Hollow. Her talent allows her to manipulate light, whether it's to give lightning bugs their glows or create rainbows. She can be worrisome and resort to panic when there's nearby danger. She is a medium-sized fairy and has her hair braided up and bound in a bun that shimmers with pixie dust. In Disney Fairies: Tinker Bell, she likes topaz.

In the first film, Tinker Bell (2008), she was present during Tinker Bell's arrival alongside other Light Fairies. Like Rosetta, Fawn, and Silvermist, she welcomed Tinker Bell with open arms. When Tink wanted to change her talent, Iridessa was uncertain and wasn't too enthusiastic about it, feeling the impending doom. She tried to help by getting Tink to give some fireflies some light, but it backfired. She went to the Mainland with Tinker Bell and the others to deliver spring when everything was fixed.

Tinker Bell and the Lost Treasure (2009)

In Tinker Bell and the Lost Treasure (2009), she simply makes a few cameo appearances assisting the changes of season. Tink asks Iridessa and all her friends for fairy dust, but they all declined. Each fairy can only have a certain ration of pixie dust, and the warm season fairies needed it when traveling to and from the Mainland. They weren't aware she needed the dust to find a mirror that could grant a wish to repair the shattered Moonstone. Iridessa appeared in the end, prepping the Blue Moon Harvest and celebrating the creation of the blue pixie dust.

She went to Fairy camp with the other fairies in Tinker Bell and the Great Fairy Rescue. When Tink was captured by Lizzy, she and the others: Silvermist, Vidia, Rosetta, Fawn, Bobble, and Clank, built a boat to get to her. On their way to rescue Tink, it rained, and the fairies resort to walking since they can't fly in the rain or with wet wings. Vidia got trapped in the mud along the way, and Bobble and Clank went to find something to help pull her out. While the rest of the fairies tried to help her out, a car turned on the muddy street threatening to crush them until Iridessa alarmed the driver to swerve with a bright shine of light. Later, she helped distract Mr. Twitches while Vidia saved Tink. When Vidia was captured by Dr. Griffiths while saving Tink, the rest of the fairies gave Lizzie Griffiths, Dr. Griffiths' daughter who loves and believes in fairies, pixie dust to save their friend. In the end, the fairies make peace with the Griffiths and have a picnic while reading Lizzie's fairy journal.

In Pixie Hollow Games (2011), she is playing for the light-talents and her partner was Lumina. They most likely lost because Iridessa used too much pixie dust on the teacups they were racing.

In Secret of the Wings (2012), Iridessa and the others were alarmed from their daily tasks; Tinkerbell crossed the border into the Winter Woods when helping Fawn transfer animals. Warm-season fairies can't cross over to the Winter Woods; their wings can fracture and break, making them unable to fly. Fortunately for Tink, she was fine except for the idea that her wings were glowy while traveling in the Woods. Iridessa, as a skilled light fairy, said it was the sun's reflection. Everything was assumed to be normal until Bobble and Clank told Iridessa and the others that Tinkerbell continued to travel into the Winter Woods and discovered she had a twin sister, Periwinkle: a frost talent fairy. It was hard to phantom since twins were a rarity amongst fairies. Everyone helped create a snow machine to protect Periwinkle on her upcoming tour through the warm sunny side of Pixie Hollow. Iridessa used her skill to create rainbows to amaze the winter fairy. The tour was cut short when Periwinkle started to feel sick with the warmth as the machine ran out of ice to make snow. While the cold weather freezes a warm fairies' wings until it breaks, the warm season causes winter fairies' wings to melt. Periwinkle almost had a close call in losing her wings but was able to recover once reaching the Winter Woods. That's when Queen Clarion and Lord Milori emphasized why Peri and Tink couldn't be together. There wasn't much said that could comfort Tink since it was a law to not cross into the Winter Woods. Either way, it wouldn't matter; the Snow Machine Lord Milori struck down fell into the river that separated the polar regions. It was stuck on ice and began to create a vast winter that started to freeze all of Pixie Hollow, and every warm season fairy was threatened. If they were in the cold, they would lose their wings, and then Spring, Summer, and Fall will cease to exist on the Mainland. Also, the winter could destroy the Pixie Dust Tree. If the tree dies, pixie dust will cease to exist; no fairy old and new will be able to fly again. The two worlds will be in chaos and ruins. Iridessa, alongside all the fairies, retreated and placed all the animals in shelters. All was lost until Tink discovered that frost preserved nature, which led Periwinkle and other frost talent fairies to shield the Pixie Dust Tree. This discovery also permitted warm fairies to travel into the Winter Woods. With frost, their wings would be protected and not break.

In The Pirate Fairy (2014), Tinkerbell and her friends accidentally swapped talents. How ironic that Tink can now be another talent once accepting her own. Iridessa becomes a garden fairy.

Iridessa is kind and friendly but extremely worrisome- a trait that becomes more prominent as time goes on. Thanks to many of her friends being reckless and lacking foresight, she has a lot to worry about. Generally, most of the jokes surrounding her will be about her responding to a stressful situation by being either fearful or nervous.

Iridessa is medium-skinned and has her hair in very small cornrows, pulled into a bun that shimmers with pixie dust. Her body type is very similar to Tinker Bell. Her dress is always bright yellow, with flower petals for a skirt and a single sunflower on her chest. In one "joke outtake", she is shocked to see it and knocks it off, asking, "how long has that been there?", but it is, in fact, part of her regular design.

Iridessa is close friends with Rosetta, Fawn and Silvermist, and became close with Tinker Bell shortly after her "Arrival Day". Later, they all became friends with Vidia as well. Other friends include Clank, Bobble, Periwinkle and Zarina.

At the beginning of Vidia and the Fairy Crown, Iridessa talks briefly when Queen Clarion asks everyone if they have seen her crown.

Iridessa is seen briefly in Fira and the Full Moon when all the light-talents eat together. Then again at the arrival of the triplets, Sparkle, Helios, and Glory.

In Tink, North of Never Land, Terence gives Iridessa her daily cup of fairy dust. She then showed him a light show with sparkles of every color. She is seen again at the end having been worried about Tink, and happy to see her.

In Iridessa, Lost at Sea she is attacked by an owl and then appointed by Queen Clarion to find a way to get rid of it. Tink comes and helps Iridessa with ideas. They have a fight about what they should do, Tink goes to find a bottle and Iridessa goes after her. They accidentally get trapped in the bottle and thrown off the ship.They encounter several creatures along the way including a sea turtle, the mermaids Numi and Oola then a colorful crab. They made a boat out of the bottle then washed along the shore when Beck found them and helped them back to Pixie Hollow. The light-talents then helped put sunbeams in the bottle to scare away the owl. They put the bottle in this nest forcing him to leave. 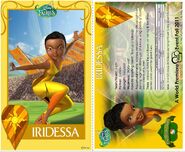 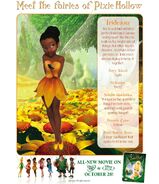