Melted Acorn butter on anything

Fawn is an animal fairy character and a minor character in the books, but one of Tinker Bell’s primary friends in the movies (and star of the final film in the franchise). Fawn is a rascally tomboy full of mirth and mischief. She’s always ready to play, and the more rough-and-tumble the game, the better. Fawn is a born prankster — she likes to play tricks on Iridessa, Beck, and Horace— and Tinker Bell loves her mischievous nature. She speaks many different animal languages, but the burp-like toad-speak is her favorite.

Fawn also has a softer side to her as one of the caretakers of Mother Dove. She is fluent in almost all animal languages and is considered one of the best of her talent. Fawn serves as the secondary deuteragonist of the first four films. She is Buck's secret crush.

In Tinker Bell Fawn is first seen at the arrival of Tinker Bell, where the places the egg charm if Animal would have been her talent. Fawn, along with the others, tried to help Tink change her talent when she didn't want to be a tinker anymore. She tried to teach her how to aid in baby birds' first flight, but ended up by Tink getting attacked by a hawk. Later, she, like the other fairies, thought that Tinkering was really Tink's talent, and didn't try to help her change anymore.

In the sequel, Fawn is first seen in the mainland, changing the season to the fall. Later on, she attends the show at the Fairy Tale Theater and sits alongside Tinker Bell and Fairy Mary right after she had been training some skunks. The following days, Fawn spends time on preparations for the Autumn Revelry, a night where blue pixie dust is bestowed upon Pixie Hollow and the pixie dust tree such as preparing her 21 Butterfly Salute. Fawn is seen celebrating alongside Iridessa, Silvermist, and Rosetta on behalf of Tinker Bell's success on providing the blue pixie dust.

Fawn and her friends leave Pixie Hollow for Fairy camp on the mainland. There, Tinker Bell is captured by a human girl named Lizzy Griffiths, having Fawn and the others venture off to rescue her. Because of the heavy rain however, the fairies are forced to build a boat to get to Lizzy's house. While making way on the boat, Fawn notices a waterfall ahead, and warns the others to brace themselves. Luckily, Silvermist is able to rescue them. Once they finally reach the human house, Fawn and her friends are attacked by their cat. Despite being an animal fairy, Fawn is unable to immediately tame the cat under pressure. A chase pursues before Fawn is able to find catnip, eventually taming the cat. While Fawn and the others are taming the cat, Vidia is kidnapped by Lizzy's father, Martin Griffiths, and is taken to London for study.

In Pixie Hollow Games, her partner was Buck. They won the first event of the games (leap frog), but apparently lost sometime in the middle.

When it is time for animals to hibernate and retrieve their winter coats, Fawn begins to cross animals over the border to the Winter Woods. One particular bunny is afraid to cross and tries to evade Fawn. The chase leads to the tinker fairies area where Tinker Bell catches the bunny using a fishing rod-type invention. When Tinker Bell learns that Fawn crosses animals over, Tink offers to help, hoping to journey into the Winter Woods. When the two fairies arrive, Fawn explains that animal fairies - and all warm fairies - are not allowed to cross; they just see the animals off. Fawn then tries to wake one of the animals that began hibernating too early. While Fawn does this, Tink crosses the border.

Fawn notices and reels Tink back over with the rod. Fawn then notices that the tips of Tink's wings were frozen and rushes the tinker to the healing-talent fairies. Silvermist, Vidia, Rosetta, and Iridessa meet with Fawn and Tink at the doctor. Tink recovers easily after her wings were warmed, and the fairies are able to depart. It was then that Tinker Bell tells her friends that her wings began to glow when she crossed the border. None of her friends believe her, including Fawn, who did not notice. To find out more, Tink crosses the border once again. When she returns, she tells her friends that she met her long-lost sister, a winter fairy named Periwinkle.

To allow Periwinkle to visit the warm regions of Pixie Hollow, Fawn assists Tink and her friends in creating a snow-making machine. The next day, the fairies introduce Peri to the wonders of the warm regions, showing off their unique abilities in the process. Fawn was able to show Periwinkle her first group of butterflies, something Peri has dreamed of for a while. Soon enough, however, Peri begins to become weak because of the heat, so Tink and the others rush her back over to the Winter Woods. Lord Milori, the ruler of the Winter Woods, and Queen Clarion declare that Tinker Bell and Periwinkle may never see each other again for their own safety.

Some time afterwards, the snow-making machine goes on the fritz and freezes a portion of Pixie Hollow. Fawn and the others destroy the machine, but the half-frozen Pixie Hollow throws off the balance of the season. Soon enough, all of Pixie Hollow becomes threatened, including the Pixie Dust Tree. To save the tree, Peri and the frost fairies use their frost magic to preserve the tree, thus saving fairy life. In the end, Queen Clarion and Lord Milori allow warm fairies to cross the border. Fawn is last seen enjoying herself in the snow with her friends and the rascally bunny that was afraid to cross earlier.

During the Four Seasons festival, Fawn and the fairies are preparing for their act when Zarina the pirate fairy puts all the fairies to sleep and steals the Blue Dust. She accompanies her friends in getting the dust back but Zarina magically swaps their talents and Fawn becomes a light fairy. She accidentally burns the back of Rosetta's hair while fooling around with her powers.

Tinker Bell and the Legend of the NeverBeast

Fawn is the main character in this movie. She is first seen trying to sneak a baby hawk, called Hannah, into Pixie Hallow so she can help it because it is injured. Once Hannah was ready to be sent back into the forest, she asked Tink to build a large basket to safely carry Hannah. Tink is curious. She asks what the basket is for, and finally, Fawn tells her. They cover the basket with fresh blueberries, pretending they're taking them into the forest for hungry animals. Gruff.

However, Tink and her best friends are not so sure about this scary addition to Pixie Hollow. When the elite Scout Fairies set out to capture the monster, Fawn must trust her heart and take a leap of faith if she hopes to rally the girls to save the NeverBeast.

At the beginning of The Trouble with Tink, Fawn is seen playing fairy tag with Tinker Bell and the other fairies.

​​​​​​In Beck and the Great Berry Battle, she is seen at the beginning when a baby raccoon was in need of help. She is one of the first fairies to get hit by a berry during the Berry Battle before lunch. She also tried to help negotiate things between the hummingbirds and chipmunks, but failed.

Silvermist and the Ladybug Curse (2008 book)'

She appears briefly in Silvermist and the Ladybug Curse, at the fairy picnic, playing games with the other fairies.

Fawn and the Mysterious Trickster (2009 book)

Fawn is the main star of the book, as a prank war escalates between her and Beck. However, as pranks start befalling the two that neither can remember, it seems that a mystery prankster is at work. In the end, it turns out that Fawn was pranking in her sleep. 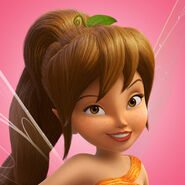 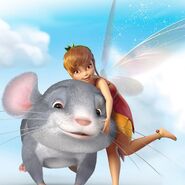 Fawn in The Legend of the Neverbeast 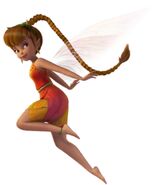 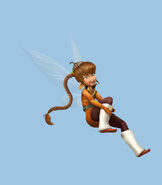 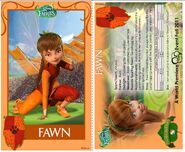 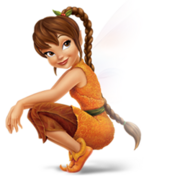 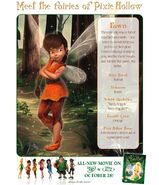 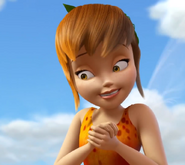 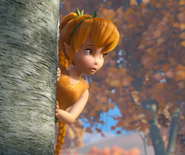