Fairy Haven and the Quest for the Wand

Fairy Haven and the Quest for the Wand

"Beware a mermaid’s wrath!" the mermaid Soop warns the water-talent fairy Rani. Soop has grown tired of waiting for the magic wand that Rani promised her in exchange for her help saving Never Land. And though Rani would love to fulfill her promise and bring Soop a wand, Mother Dove, the wisest creature in Never Land, has forbidden it. Her patience at an end, Soop sends a flood to destroy Fairy Haven. Now the only thing that can save the fairies’ home is the arrival of the wand. Rani, Tinker Bell, and the fairy queen, Clarion, set off on a perilous quest to find a wand, a journey that takes them across an ocean, to the palace of the Great Wanded fairies. Many obstacles stand between the Never fairies and their desire for peace in Fairy Haven, not the least of which are their own secret dreams. For a wand can easily tempt a fairy into making a foolish wish, with terrible consequences.

Several fairies are beset with "Wand Madness", which results in many of them making selfish wishes, breaking their promise to Mother Dove not to make any but the most important. Queen Ree shrinks all the hawks in Never Land, Rani wishes for Soop to be her friend, Tinker Bell punishes Peter Pan by making him fall in love with a shell, Vidia wishes herself to be as fast as she chooses to be, and more. Mother Dove worries, as Wand Madness is powerful, and all the fairies seem affected.

Things get worse when Rani is transformed into a bat by a Mermaid's song, Soop renders her best friend mute in a fit of rage, and more, and soon it's clear that the Wand must be returned back to the Great Wandies. However, the sleeping wand is awakened, and begins to assault the fairies, tossing them about, enlarging and shrinking them, and nearly killing many -- it requires great effort and fairy dust from Tinker Bell to enlarge the malicious wand's heart and mind, thus making it kind. It undoes all the wishes (save the one nice one), and is then returned to the Great Wandies. Fairy Haven is safe, but many of the characters are changed -- Rani now has a logical, politeness-obsessed bat placed within her, Tinker Bell knows Terence loves her, and more. 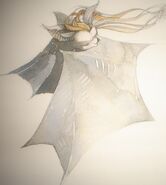