View source
This page is about Captain James Hook, a recurrent Disney's character. For deeper information about other franchises see Disney Wikia.

Tom Hiddleston
Captain James Hook is the captain of the pirate ship Jolly Roger. In the Disney Fairies/Tinker Bell franchise, he debuted in Fairy Dust and the Quest for the Egg (2005).

In Fairy Dust and the Quest for the Egg (2005), when Mother Dove's egg breaks he like the other Never Land residents start to grow older. Later, the questers took his double cigar holder while he was asleep to give to Kyto so he would restore the egg

In Iridessa, Lost at Sea (2009), he appears briefly when Iridessa and Tinker Bell snuck onto his ship and ordering Smee around.

In Bad Day to be a Pirate Pixie Hollow (online game)'s play (2010), Hook and Smee got a fake map to Pixie Hollow, from Foxmoon and Windy, and falls into the fairies traps.

In Tinker Bell to the Rescue graphic novel (2010), Vidia is captured by Hook and Smee, being later freed by the other fairies.

In Tinker Bell and the Pirate Adventure graphic novel (2011), Hook and the pirates stole bananas, yet the fairies took the bananas back to the Tiffens.

In Tinker Bell and Her Stories for a Rainy Day graphic novel.

In The Pirate Fairy (film) (2014), James makes his first appearance in the Disney Fairies' motion pictures. James meets Zarina and poses himself as a benevolent cabin boy, who appreciates her, "unlike the rest of her former friends" as he reinforces. As the others pirates could not understand her he works as her translator as they play pretend that she is their captain. After she steals the Blue Pixie Dust, creates their own Pixie Dust Tree to make their ship fly, and teaches James how to fly, he lock her in a lamp and throws it in the ocean. In the end he faces Zarina, but falls in the ocean and is chased by Crocky.

In The Pirate Fairy (chapter book), he said he has Eton education and that he could not understand Zarina at first, not being further expound. Near the end it said he changed his accent when he revealed he was tricking Zarina 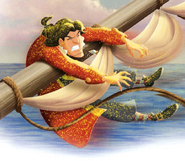 Captain Hook as he appears in the books

Captain Hook as he appears in the movies