light complexion, brown hair in a side ponytail and violet eyes

Art-talent
Bess is an art-talent fairy and the main character of A Masterpiece for Bess and Art Lessons by Bess.

Bess is considered the most talented art fariy in Pixie Hollow. Her most well known paintings are those portraying Mother Dove, that she paints every year. The first one was painted around the time Prilla came to Pixie Hollow.

Bess's studio is made out of an old tangerine crate which washed up on the beach one day.[1] It is her favorite place in the world.

In Fairy Dust and the Quest for the Egg, at the beginning she is seen painting the rest of her portrait of Mother Dove. During the hurricane she tries hard to hold on to it.

In Fairy Haven and the Quest for the Wand, she is mentioned wishing to make brushstrokes like lightning and paints as pure as new souls.

In Fairies and the Quest for Never Land, to help save Never Land she painted the face of the dragon suit. She came along on the quest in case the face got damaged.

In A Masterpiece for Bess, after Bess painted a portrait of Tinker Bell, other fairies started asking for portraits too. Her friend Quill constantly caught her in embarrasing moments, like when she went to go get paint or when her wings got wet. Later when she painted something that wasn't a portrait, no one appreciated it except Vidia, whom Bess gave the painting to when Vidia caused her to have a realization. She then realized that her portraits were just fads, Quill told her about her fad making Bess feel better.

In Prilla and the Butterfly Lie, after a few fairies had caught the fairy pox the fairies at her table shifted away from her noticing her paint speckled arms.

In Dulcie's Taste of Magic, at the end she is seen when Dulcie's comfort cake was revealed to everyone.

In Queen Clarion's Secret, she was seen briefly flying in the wind and laughing, because it was so windy she could not fly straight.

In Four Clues for Rani, she paired up with Fira for the Fairy Treasure Hunt.

In Disney Fairies Storybook Library, Bess appears in one of the stories with a case of artist's block. Many of her friends arrive to give her some inspiration- they bring gifts, but Bess finds all of the attention distracting until she comes to an epiphany and draws a large masterpiece of her friends, with their gifts, all beside her.

She is outgoing, caring, and fun to be around. She loves to paint. Her favorites of many friends are Lily, a garden talent fairy; and Quill, another art-talent fairy. Bess gets so involved in her creations that she often doesn’t notice that she has paint splattered on her clothes and in her hair.

From the book A Masterpiece for Bess

official sketch by Daniela Vetro for the Disney Fairies Magazine 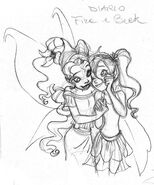 official sketch by Daniela Vetro for the Disney Fairies Magazine