Hide and Seek[1]
Beck is an animal-talent fairy, and Mother Dove's assistant in Gail Carson Levine's Trilogy. She is also the protagonist of some books and Comic Series.

Like others of her talent, she is kind toward all animals. She is pretty much the only animal talent fairy that checks on Mother Dove all the time. Beck loves animals so much that she even wants to be an animal herself, and spends more time with animals than fairies. Beck is the only one who can speak Bird without an accent, and she can read the thoughts of any animal.

In Fairy Dust and the Quest for the Egg, she is first seen with Mother Dove. During the hurricane she protected a group of baby moles until their mother came. She is really disappointed when Mother Dove asks Tinker Bell to stay by her side instead. Later, she took care of Mother Dove when she got hurt by a fox.

In Fairy Haven and the Quest for the Wand, during the flood Beck helps the animals and Mother Dove. Later, she helped find Rani and turn her back from a bat with Prilla and Tinker Bell. She also helped the golden hawk while he was small.

In Fairies and the Quest for Never Land, she is seen still protecting Mother Dove initially from Gwendolyn. Later, she went with the others on the quest for never land. She also helped the golden hawk when his wings wouldn't stop burning. When Kyto took Mother Dove, Beck tried to protect her and get inside his mind. At the end she is fine.

In Beck and the Great Berry Battle, Twitter warns her about the fight between the hummingbirds and the chipmunks, but doesn't take him seriously. She soon finds out that it is very serious, she tries to negotiate between the two groups, but the Berry Battle still goes on. Over the next few days Beck tries her best to settle things. She even introduces Twitter to Nan, a chipmunk, to help diffuse things between everyone. But, when Twitter and Nan are in trouble Beck manages to get the attention of the groups and they help save them together. At the end they all laugh at how silly they have been, when they see that Grandfather Mole was the one that had the hummingbird nest which was the whole reason they were all fighting.

In Rani in the Mermaid Lagoon she is seen briefly at the Fairy Dance dancing beside Tinker Bell.

In The Trouble with Tink, she is seen playing fairy tag. She and Fawn were the leaders of the animal-talents in the game.

In Fira and the Full Moon, she is seen briefly at the start taking care of the fireflies when they caught the firefly flu. Then again at the arrival of Sparkle, Helios, and Glory.

In Silvermist and the Ladybug Curse, she is seen at the fairy picnic, playing games with the other fairies.

In Iridessa, Lost at Sea, Beck appears at the beginning, telling everyone that the owl is wild. She then appears at the end, helping Iridessa and Tinker Bell back to Pixie Hollow.

In Four Clues for Rani, she partners up with Jerome for the Fairy Treasure Hunt. She stays behind for a minute to explain about Brother Dove's wing and to introduce Cousin Dove to her. They get tricked by Peter Pan and the Lost Boys like all the other fairies.

In Beck Beyond the Sea, Beck yearns to travel far beyond Neverland after hearing a friendly boar talk about it, and watching some Explorer Birds travel at high speeds. Borrowing some of Vidia's "special dust" (taken from Mother Dove's wings being cruelly plucked), she makes the journey.

This section lacks information. You can help Disney Fairies Wiki by expanding it.

This section lacks information. You can help Disney Fairies Wiki by expanding it.

This was the only store in which the players were able to purchase Animal Friends.

In Shooting Stars flash player mini-game, Beck was one of the playable characters with four animated sprites, being three waist up and one in icon size, seen from the top. Her movement and objective was the same as others, to shoot all stars with the given attempts. 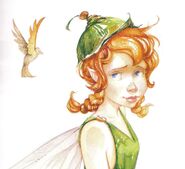 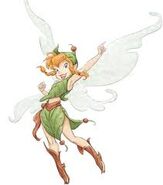 Beck Beyond the Sea

Beck in the Great Berry Battle 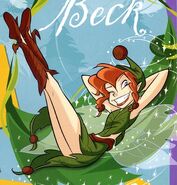 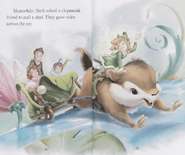